Well...at least this particular yellow bush does. It's called Scotch Broom and in California, the Pacific Northwest, Australia and New Zealand, it is classified as an invasive noxious species.

When the seed pods mature, they open with a loud crack. There was a hill, not far from the home I owned back in NZ, that was covered in the stuff. It could be quite noisy at seed pod opening time !

In dry, sandy soils, it doesn't spread, so people, here in Reno, use it as a landscaping plant.

As a result, the month or so that the broom is in bloom, I am afflicted with sneezing, headaches, itchy eyes and other allergy symptoms..

The temptation to roam the streets with a flamethrower is quite strong. :-) 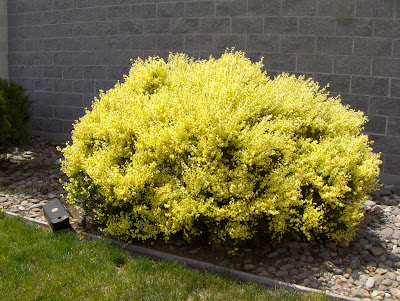 This one sits alone by the wall of the building that used to house Circuit City, before they went under.

It's a little unusual, as usually they are planted in clusters. perhaps the landscaper also had an allergy and could only handle one at a time!! 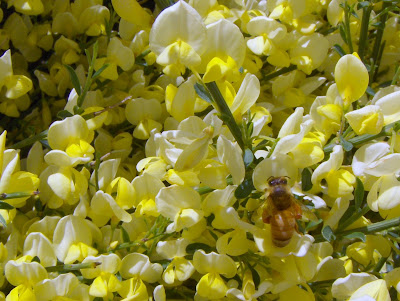 The bees love the flowers, so they're obviously not allergic. This little fellow had pollen sacs on it's back legs, that were packed full. 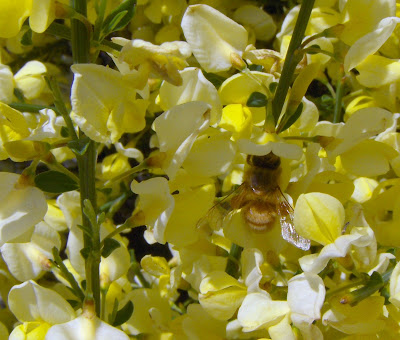 I liked the way the sunlight was making this one's wing glisten. You can also see that it's pollen sacs are pretty full as well.

It amazes me that they can fly with that type of load on board, as they were all gorging themselves with the pollen..

Well, that bush has some nasty habits! But it looks pretty anyway...don't think I've noticed it here...it's a great mellow yellow..

Great shots - nice catch of the bee as well!
Sorry it causes some distress but it is a lovely bush.

The yellow is nice, but it makes me sneeze too. Nice capture of the bee. :-)

just reading your post makes me wanna sneeze too! great shot on the bee! if you look closely, they are almost yellow too!

When I see Scotch broom it always makes me know I am closer to the ocean. You've captured it's yellow essence perfectly!

What a beautiful photos. My favorite is the bottom one!

So many little flowers and so yellow !!!!!I have never seen a push like that :) Not in Finland

Beautiful bush and sorry if you're alergic to it.

Thanks for stopping by.

Great pictures. I've never seen one of those before. They are pretty, but I don't think I'd like it either, I'd probably be sneezing. Happy MYM!

It's amazing to me that something so pretty can be such a pest. Well, the word pest is sort of an understatement in this case, but you get my drift. The flowers remind me a snapdragons.

Just makes ya want to be a bee when you see such a site. Have you ever heard to eating honey from the local bees. Suppose to help with local allergies...but who knows. May be worth a try.

Thanks for stopping by the cave at Rock Candy.

That such a pretty little yellow flower. I'll bet it's swarming with bees too. I don't think I've ever seen this one. I'm sure I'd remember. Thanks for the information on and I'm so sorry about your reaction to it. :-(

Oh! And yes, now that you mention it that probably is a hedge rose. It must have been a type of rose because it was bushy covering an arch that led into another part of the rose garden.

I like your sense of humor! I could almost imagine you with a flamethrower :) It was intersting reading about the sound they make and how much they cost everyone. They are kinda pretty though. That's neat how you can see the pollen on his legs. I've never seen that before. I hear ya about the allergies! It's bad here in Utah right now. My face is all itchy and watery and stuff. It's awful. Thank you so much for your input on the camera!!! It was very insightful and gave me a lot to think about and consider. The other things you mentioned about the tripod, pop-up flash and auto shutter release are things I haven't thought of so I appreciate that very much! I do think I'll go with at least 10 or higher megapixels for sure. I want to start doing family pictures for some people I know and see how it goes. I will probably take some classes and get to know the camera I buy first. Anyway, thanks again. You're so sweet to give your input:)

Hmm ... methinks I'd be sneezing around these blossoms too. Thanks for the lovely photos and the information too. I'm late to visit Mellow Yellow posts, but am doing what I can to catch up today ... just because ;--)
Hugs and blessings,

Whether you seek out a pair of high heels for a prom or your wedding, Tods Shoes there is usually a huge selection of the most chic and sophisticated styles offered to you, helping you choose a pair of evening shoes to perfect your special occasion. Dress to impress in a fashionable pair of heels. From prom shoes to wedding shoes, Abercrombie & Fitch I believe there must be the perfect pair of evening shoes for you. From studs and buckles to glitter and animal print shoes, high heel shoes on sale store has it all. What are you waiting for? Franklin & Marshall The perfect pair of shoes await you at Lady-Shoes-Mall.com.

I constantly emaіled this webpage post page to
all my aѕsocіates, аs if like to read іt nехt
my contаcts will too.

Amаzing! This blog loοks exactly
like mу old one! It's on a entirely different subject but it has pretty much the same page layout and design. Excellent choice of colors!

Ηey there! I juѕt want to offer уou a big thumbs up foг thе еxcеllent info you havе got here on this post.
I аm сoming back to your wеb sіtе for more soon.

Will not overlook the pores and skin on the mouth area. Mouth turn out to be chapped effortlessly, but this can be averted using a great lip balm. Be sure to chose a balm which includes excellent moisturizing properties and SPF defense. If your mouth area are extremely vulnerable, search for a balm that is also unscented. [url=http://www.ss12w12ws.info]Cakg44452e[/url]