My daughter sent me these photos.. 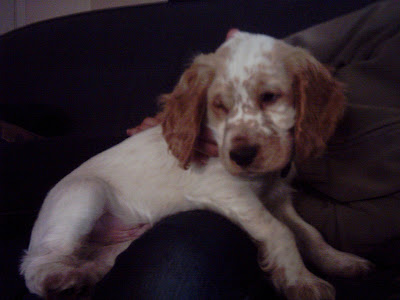 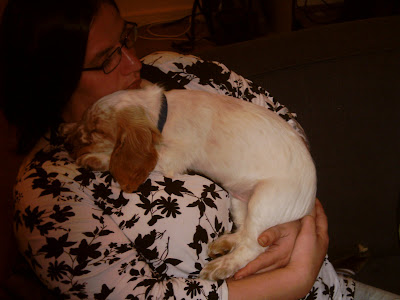 He just loves his Mummy....

Apparently, a typical early morning scene, in my daughter's household, now goes something like this ....

'Ruben, it's 6am Sunday morning!!' (vain attempt to pull blankets over heads...)

'Ruben, Farmer Brown's rooster is on the other side of the airport, you can't possibly hear him, now go to sleep !!'

Which explains why my daughter was up and about at 7am, last Sunday, when I phoned her. Just like she was when the human grand kids were babies. :-)

Have a great weekend all !!!

Skywatch Friday - An Ant View Of The Sky

Haven't been out much, this week, to look for photo opportunities for SWF ... plus there hasn't been much going on in our skies this week.

There are two wildfire's burning on the other side of the city. Hopefully they will have them under control soon and the personal fighting the fires remain safe. Also, that no homes are lost.

The smoke in the air does lead to some spectacular sunrises and sunsets, though.

Anyway ... I was looking at my small garden, early this morning and I noticed there were quite a few ants scurrying around...

I think my neighbours are quite used to my strange antics, when it comes to photography, by now. So I guess none of them got the urge to call the men in white coats, this morning, at the sight of me, in my pyjamas, half upside down in my vege garden... 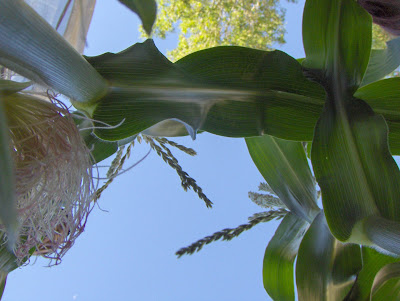 What an ant, in my corn patch, sees when looking up... 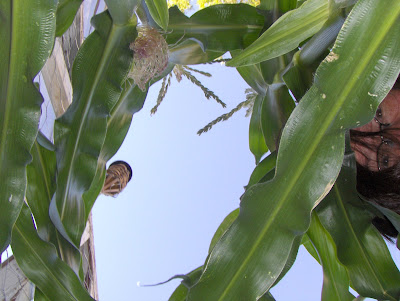 Sometimes it gets to see more than it bargained for ...as I did, when I downloaded this shot :-) Can you see the face? :-)

Have a great weekend :-)

Go to SKYWATCH for views of the sky from all over the world !
Posted by Unknown at 12:01 pm 31 comments

Watery Wednesday - Fun On The River 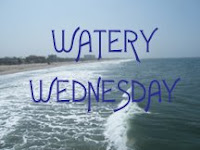 I think I'm slowly getting the hang of my 35mm film SLR camera ... these were all taken with it, last week, when we went down to the Truckee River. 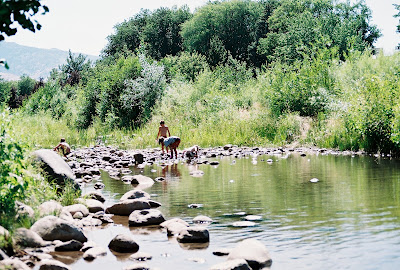 Kids looking for little fish in one of the pools of water off the Truckee... 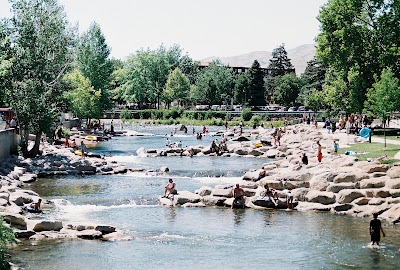 View down the Truckee from one of the bridges.. 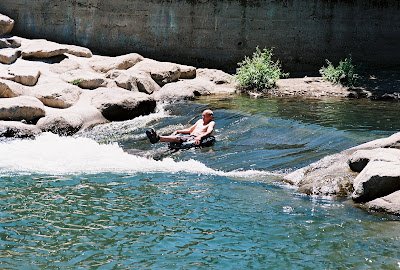 The hubby, recapturing his childhood !! 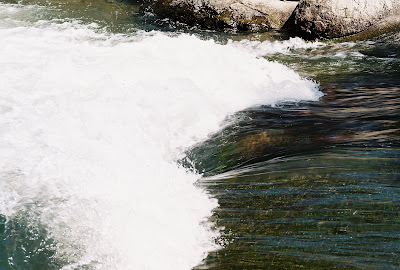 One of the little rapids in the Truckee white water park....

My World Tuesday - Too much excitement for one week..

Things got a little exciting in my little corner of the world, last Friday.

Just before 10pm, I was outside looking at the garden, when I heard a siren going down our street. Looking up, I saw a huge billow of smoke, tinged with orange, in the night sky.

I yelled for the hubby and started down our driveway. About halfway down there was a large explosion that you could feel through the soles of your feet.

Once down on the street, we soon realised that the little corner store, near us, was on fire.

There is an apartment and storage area attached to it and that was what was burning.

Once there, I remembered my little digital was in my jeans pocket. The hubby obligingly offered his shoulder as a tripod, which made it a little easier to take the long exposures needed for night shots.

Most of them came out rather blurry, as unfortunately we both needed to keep breathing .... but these two shots came out reasonably blur free :-)

The first two photos look better if you keep them the size they are now. However you can click on the last two to enlarge. 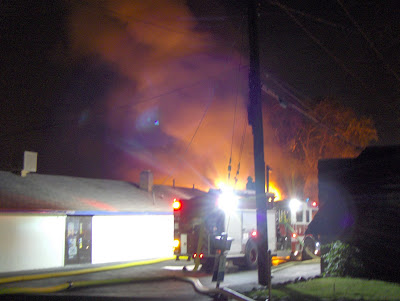 The market just as we got there, with the back still fully engulfed in flames. 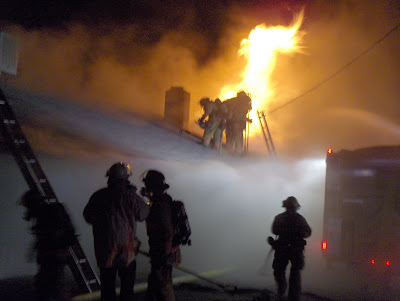 In this shot, the fireman had just chainsawed through the roof and flames were shooting out into the air. I felt rather nervous for the men up on the roof, as they were quite close to the flames. Made for quite a dramatic photo though.. 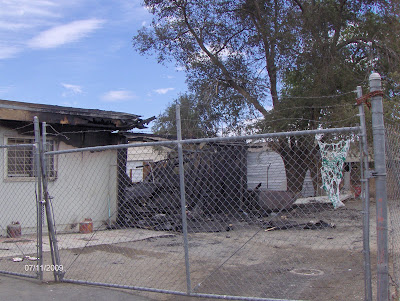 The aftermath the next day. You can see how hot it got as the sign on the gate, to the right, melted.. 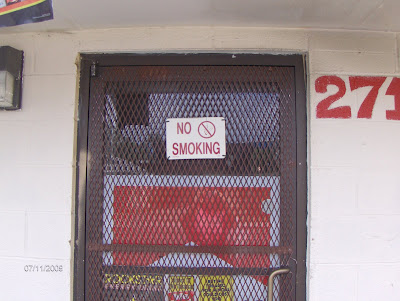 I found the sign on the front door of the store, a little ironic. :-)

Friday night I sent in the best four photos to one of our local TV channels ..Channel 4 KRNV.

Much to my surprise, they emailed me back and said that they were going to use them.

Two of them can be found here and one here .

I will admit it was rather thrill to see them up there on the websites :-)

Now, go to MY WORLD TUESDAY where people from all over our globe , show off their little corner of the world !
Posted by Unknown at 11:05 am 51 comments

Mellow Yellow Monday - Beauty can be found in small things :-)

My husband is getting in on the act, these days....or maybe I just have him well trained. :-)

We were walking back from the store the other day, when he suddenly stops, points and says, 'Mellow Yellow Monday.'

I looked at what he was pointing at, said 'Yes' and whipped my camera out of my pocket.

He stood there quite patiently waiting while I snapped away. 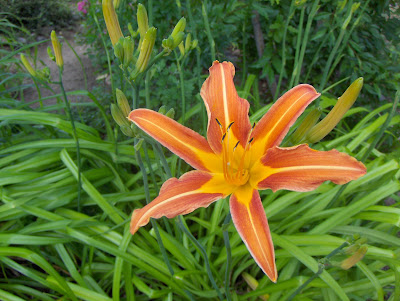 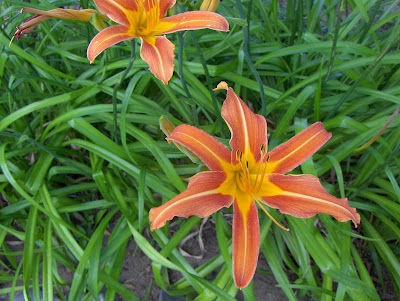 Which is what this poor little duck seemed to be saying.. 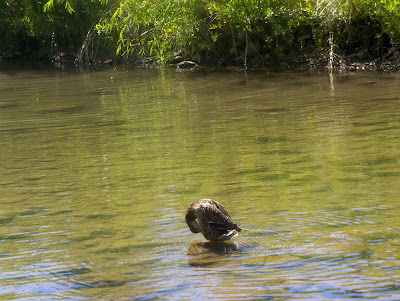 An idiotic couple, with a pit bull in tow, were thinking it rather funny to set their dog to chasing this little girl.

She was clearly terrified. However, when she spied me sitting on the riverbank, she paddled over, quacking loudly. She then settled down in front of me and started preening her ruffled feathers.

I guess she saw me as a haven of safety.

I was glad to sit and keep her company until the two twits moved off...

People who allow their dogs or kids to terrorise the wildlife and think it funny, really get my ire up.
Posted by Unknown at 7:43 am 31 comments

The skies, in my part of Nevada, have settled down into their usual, bright blue, cloudless, summer mode.

After living here for a couple of years,I was beginning to think that our summer skies were, for the most part, pretty boring...

That was, until I got really interested in photography, joined SWF and a couple of other photo memes, and started looking at the world around me with new eyes..

It forces you to look at the sky with a new perspective and find other ways that you can highlight and compliment that unrelenting blueness.. 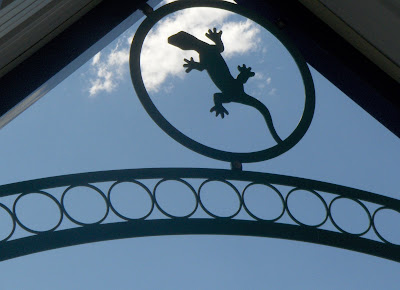 I was sitting down at my local park, a couple of days ago, watching this one small, wispy cloud, float across the otherwise cloudless sky..

'Yeah, right,' I thought to myself, 'that one cloud is going to make an interesting photo, NOT !!'

Then it disappeared behind the roof of the shelter that I was sitting under. I glanced up and until that point, I had not realised that there were decorative lizards at each corner of the building..

I thought that the lizard definitely highlighted my blue sky and one, solitary, wispy cloud :-) 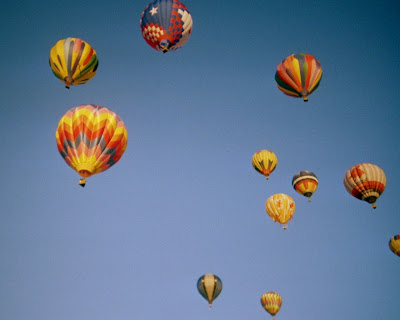 Taken at the Great Reno Balloon Race, a number of years ago.

I snapped this one with one of those little disposable film cameras, so I'm quite looking forward to going back this year and taking along my 35mm SLR and digital cameras. :-)

Somehow, those plain , blue skies are looking a lot more interesting, these days...


Go to SKYWATCH for views of the sky from all over the world !
Posted by Unknown at 8:30 am 56 comments

Camera Critters - My Granddaughter And The Crab :-) 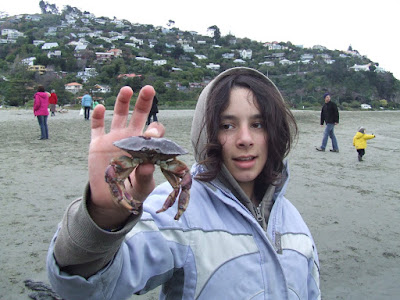 Taken by my daughter, at Sumner Beach, Christchurch, New Zealand on a cool winter's day.

Still a popular place, even when the weather is cold, judging my the other people caught by the camera.