This was going to be the post in which I introduced our newest fur baby, Shamus. Instead I want to use it as a way of educating others and, hopefully, prevent another tragedy.

We got Shamus at 6 weeks, just 4 days before Meesha passed away. Much to my surprise, Meesha was very tolerant of the little fellow, even mothering him a little, as can be seen by the photo below. 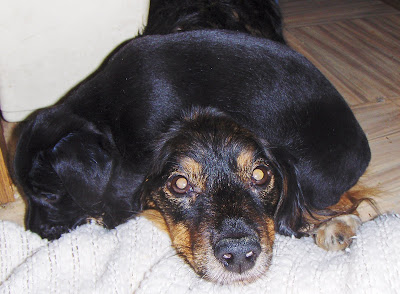 Sadly, last weekend, on the day that he was due to get his puppy shots, Shamus was diagnosed instead with Parvo. He passed just after midnight on Sunday. 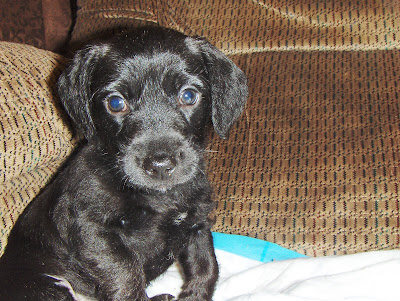 He was such a cute wee boy ... a mixture of Schnauzer, Poodle and Dachshund. He was intelligent and full of energy and we were rather looking forward to seeing what he would grow into. 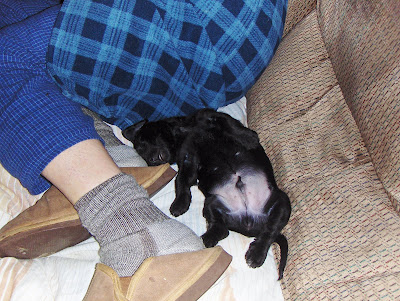 As you can see, he was making himself at home and knew how to get comfortable.. 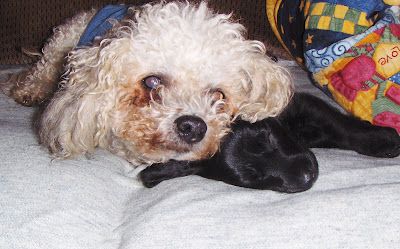 His new big brother, was also beginning to show a fondness for the little scamp..

We had done all the right things. The vet advised us not to get his shots till he was 8 weeks old. We kept him away from other dogs. Both of our other dogs had been immunised.
So the diagnosis of Parvo was rather a shock. Unfortunately, we do live in an area where there are high incidences of this horrible disease. People also walk their dogs and don't bother picking up their poop. There is also a possibility that a dog living near us also had this disease.

According to the vet, one of us may have carried the virus inside on our shoes as Parvo can remain in the environment for months. We would not even have had to walk through fresh dog poop. Poop that had turned to dust might have contaminated the ground.

I've gone through a lot of emotions over this past week ...grieving the loss of another furry member of our family .... feeling guilty that I didn't do enough .... coping with the grief that Sparky, our surviving dog, is obviously feeling.

I don't know what the future hold as to another puppy or dog. Right now I can't even think about something like that..

We need to wait another 6 - 9 months before we can even consider bringing another puppy into our family, because of the contamination from Parvo. I have bleached everything that I can bleach, so I'm pretty sure that we are fairly virus free.

Even though Sparky has had his shots, he is an old dog, so I've been on tender hooks as far as his health goes. I'm starting to relax a little, but the paranoia is still just below the surface.

I know that IF we ever get another puppy of dog, he or she will not be allowed out of the house until well after their shots have been completed and there WILL be a spray bottle of bleach solution outside and anybody walking into the house will be spraying the soles of their shoes. That simple little precaution may have made a difference to Shamus... however, it was something we never even thought about. In fact, most people that I've spoken to, don't even realise that you can track the virus inside on your footwear.

It has been a hard lesson to learn...

So once again, I find myself saying .. Rest In Peace little one ...you will not be forgotten..
Posted by Unknown at 4:49 pm 22 comments