As long as I have lived here in the US, I just cannot get used to calling biscuits ... cookies.

So, taking a line from George and Ira Gershwin .. 'You say cookies, I say biscuits.'

Which is my way of introducing a tasty treat from down under, 'Anzac Biscuits'.

Like the Pavlova, there are a number of stories around as to how Anzac Biscuits came to be and which country, NZ or Aussie, invented them.

The story that I was told, at my Grandmother's knee, was this....

Anzac biscuits evolved from traditional Scottish oatcakes. During World War 1, wives in New Zealand and Australia wanted some type of nutritional biscuit to send to their men, who were overseas fighting in the war.

Problem was, that whatever was sent, usually had to go by Merchant Navy ships, that travelled very slowly. As a result, the baked goods needed to be something that would not spoil.

A group of women came up with the idea for a biscuit made from butter, flour, golden syrup, coconut and sugar. Once baked, they were packed into air tight tins and shipped off to the men serving at the front.

Originally they were called 'Soldiers Biscuits'. After Gallipoli Campaign the name was changed to Anzac Biscuits. 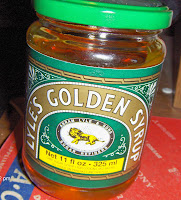 I use golden syrup in this recipe. In the US, you can find it at many International food stores. Some supermarkets also stock it, Here in Reno, I've found Lyle's Golden Syrup at Cost Plus World Market and Smith's Supermarket. You can also buy it online, including at Amazon. just type in ' Lyle's Golden Syrup '.

Golden Syrup is made by evaporating sugar cane juice until it becomes a thick, sweet golden syrup. It's used as a sweetener in Britain, New Zealand, Australia, Canada and other countries with ties to the British Commonwealth. We also use it in cooking and baking. It's great spread over a hot, buttered, English Crumpet .

You can substitute, honey or a syrup made with equal parts of honey and light karo syrup. It won't taste the same though ...


This is my version of Anzac biscuits. 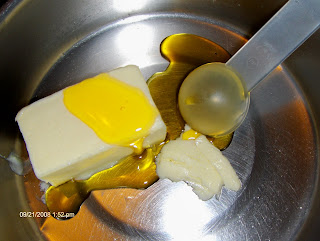 Melt butter and golden syrup together, over a low heat. Do not boil. Put aside to cool a little. 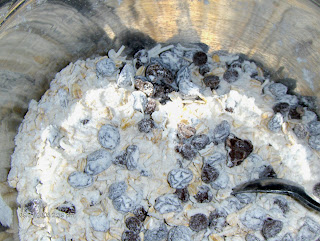 Mix sugar, flour, coconut, raisins and chocolate chips together in a bowl.

Make a well in the flour mixture and pour the butter mixture in. Mix ingredients together. You want to end up with a firm but moist mixture. If it's too dry, add a little more melted butter. 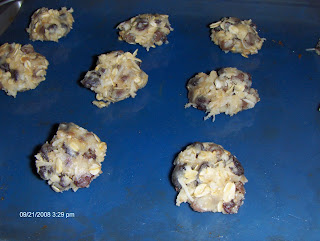 Drop in teaspoonful lots onto a baking tray. I'm using a silicone baking mat in the photo, which explain the blue colour :-) You can be generous with the teaspoonfuls.

Bake for 15 minutes or until a golden brown. The biscuits will spread out somewhat.

Take out of the oven and leave on baking tray until the biscuits have firmed up a bit. They will fall apart if you try to remove them immediately. 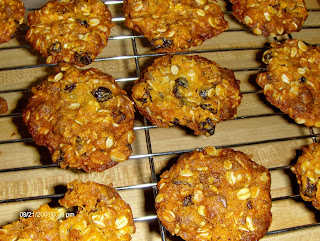 Leave them on a cooling rack till they are cold. They will crisp up as they cool. 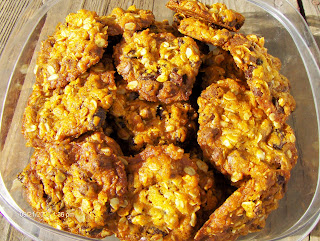 Once biscuits have cooled, put them in an airtight container so that they stay crisp.

What? Did someone say Prozac cookies? Can I have one?

Those look YUMMY! They look like a fabulous fall treat.

Except that I would have to omit the coconut. And the raisins. And now you'll just think I'm strange, but I love chocolate chip cookies - minus the chocolate chips :-)

Ooooh that Golden Syrup is intriguing! I would love to try cooking w/ it. Those biscuits--ok I tried, but it just doesn't feel right!--cookies look amazing!!

These look interesting, Karen. I'm going to try them, if I can find the golden syrup!

These look wonderful! I'll have to try them soon! Thanks for the recipe!

It has taken me a while to realise 'cookies' are biscuits too! Strange lingo over there eh? Love love love Anzac Biscuits!!!

This was like a history lesson and a recipe all in one!