Considering my propensity for nearly falling off my bike or actually falling off it ... usually due to some idiot motorist thinking that he/she does not have to yeild to me, when I have the right of way, at driveways and intersections ... this course might be just the ticket for me !! :-)

My normal modus operandi in those situations, is to jam my brakes on and use my feet as a power assist to my brakes. This usually results in a less than elegant near, or full on, introduction to the tarmac, while mouthing unprintable things at the clueless driver.

I rather like the idea of being able to gracefully leap off my bike, like the NZ bobby (police officer), pictured below, is doing. 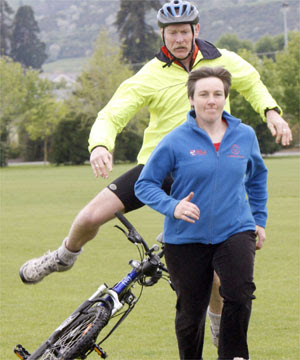 Nelson police officers now know how to fall off a bike.

Cycling coach Marianne Draijer has been putting police through their paces, teaching them how to dodge cones, do repairs, and something Senior Constable Garry Dunn likes to call "speed and tactical dismounting" or, in Mrs Draijer's words, how to fall off a bike.

They have had two practice sessions so far, which police must pass in order to use new bikes that were introduced in August.

Police currently have one bike in Nelson which is equipped with flashing lights, a loud siren, first aid kits and ticket books, and plan to eventually add another three for Stoke and Nelson.

"It's twofold --we will use them to enforce cyclists' behaviour and for covert and overt urban control," Mr Dunn said.

During an earlier training session, while practising how to "tactfully dismount a bike at speed" around the Nelson courthouse, Mr Dunn "played the bad guy" while Senior Constable Hamish Blanch learned how to jump off a bike and tackle the role of pursuer.

After dismounting and chasing Mr Dunn around the grounds, Mr Blanch "got a bit carried away with the enjoyment of it", and tackled him to the ground, Mr Dunn joked.

New uniforms, essential to complete the bobbies on bikes look, are awaiting approval. So far, it's cycle shorts with police polo shirts and the police logo on the helmets. Mr Dunn said the look was important because "the policeman's authority comes from the uniform he wears".

However, the bike officers would also be "an approachable face for the public", he said.

The new bikes had already been used to catch a bike thief and school truants who would not have been caught if the police were in a patrol car, Mr Dunn said.

The bikes give officers a better view of what was going on on the streets, such as pedestrian behaviour, he said.

Eighteen officers signed up for the training, with seven completing it so far.
Posted by Unknown at 8:34 am

I'd NEVER be able to do that! I'm so ungraceful, it's pathetic! LOL

I use to always fall of the bike! LOL Could be why I have not rode one in a long long time :)

I can't recall the last time I rode a bike. Before I was a teenager, I think. I am sure that I would be rather graceful. Not.

lol...I could use that class too...it would be nice just to look decent getting off...let alone falling off.